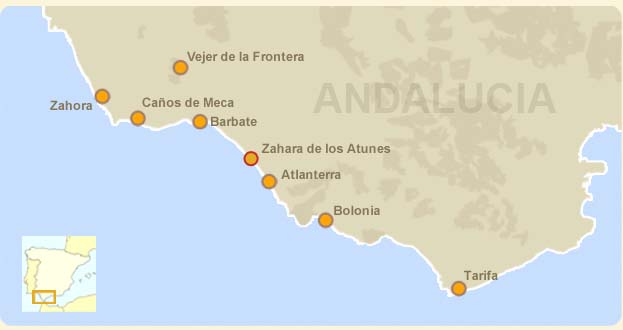 Travel guide with pictures and reviews for Medina-Sidonia Spain

Medina-Sidonia is a city and municipality in the province of Cádiz in the south of Andalusia in Spain.

It is considered by some to be the oldest city in Europe which was used as a military defense location due to its elevated location on a hill.

Many historical sights within the town walls proof Medina Sidonia to be rich in history and full of cultural heritage.

In the surroundings, natural parks and amazing environment of hills, lakes and meadows provide best conditions for the breeding of some of the best fighting bulls in the world.

The different cultures that inhabitated Medina Sidonia have marked the town with monuments and archeological artefacts from different centuries.

GoZahara.com here just lists just a few of the most important sights in Jerez. It takes a few days to have seen all of them, so you better bring some time.

The Roman city ASIDO CAESARINA was found during excavations in the center of Medina Sidonia. Just recently, in 1997, they found out that a Roman road leads about 4 m underneath todays Alamo's Street.

Another meter underneath this historical street, they found sewers which used to canalize the rain and waste water from the buildings of the city.

Obviously, the new village of Medina Sidonia is built on top of the ancient Asido Caesarina.

This Gothic-Renaissance temple of the 16th century is one of the most relevant sights in Medina Sidonia.

Its tower had been finished in the 17th century, and its altarpiece is an authentic jewel, as well as a statute of the Cristo del Perdón of 1679, made by Pedro Roldán.

This church is an Historical-Artistic Monument of Cultural Interest since the 3rd of June of 1931. The Gothic-Platerescque building is partially built on the old mosque.

It used to be an unsettled place, more than 1 kilometre away from the center of the city. The “Hospitalarios” were very famous and therefore they received a lot of money because of the painting of Ntra. Sra. De la Salud.(Our Lady of Health), whom they atributted marvelous healing power.

The church was burned in 1873 and reopened in 1875. It has three halls and a great cupola above a decorated pechina. The central hall is capped with barrel vault, lunettes and “fajon” arches, sustained by great pillars.

It is taken for granted, that the images “San José con el Niño” (Joseph with Jesus) from the Greatest Altar and “San Francisco de Asis” from the chapel located at the right hall, are made by Martínez Montañés. The Greatest Altar, with the “Virgen de la Victoria” (the Virgin of Victory), may be from the school of Pedro de Ribera.

Furthermore, in the temple you can find images from the 17th century of “San Francisco de Paula”, “Cristo de Humildad y Paciencia” (Christ of Humility and Patience) and “Crucificado” (crucified).

The city's name comes from Medina (Arabic for city) and Sidonia (of Sidon), meaning "City of Sidon", as the Phoenicians from Sidon were the first to settle here about 3000 years ago.

Later on Medina Sidonia was an important Roman city which left its archeological marks visible to the visitor today.

Medina-Sidonia was one of Spain's most important ducal seats in the 15th century, producing an admiral who led the Spanish Armada against England.

The title of Duque de Medina Sidonia was bestowed upon the family of Guzmán El Bueno for his achievement of reconquering the town from the Moors, a line which continues and was led until March 2008 by the controversial socialist, Luisa Isabel Álvarez de Toledo, 20th Duchess of Medina Sidonia (born 1936).

Medina Sidonia has a predictable climate, with approximately 70 days of rainfall and almost 300 days of sun per year.

The rain mostly falls between the months of October and May, averaging 600 l/m². The summer is dry and hot, with temperatures as high as 40°C (104°F), but winds from the ocean bring moisture to hills and valleys around Medina.

The average temperature across the year is approximately 18°C (64°F).